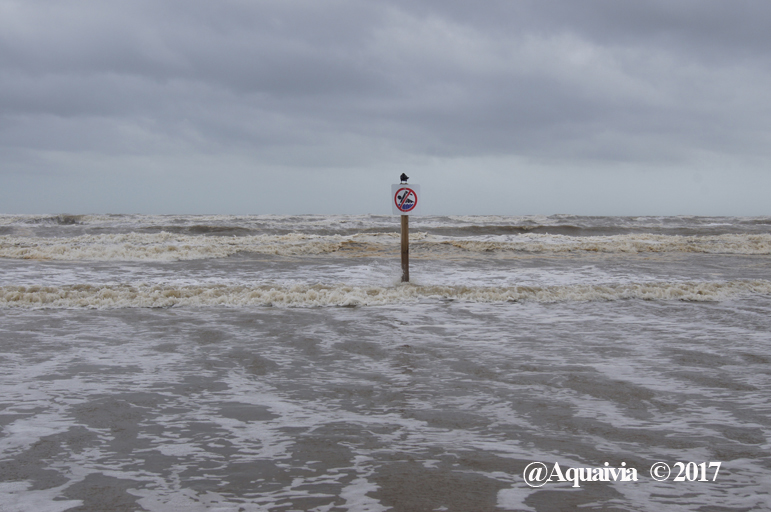 During the late-morning of Hurricane Harvey’s landfall day, Aquaivia®’s Hurricane StoriesTM Editor In Chief stopped south of Galveston, Texas, on his way to Jamaica Beach to witness the storm surge and raging surf of the typically very calm Gulf Coast beach.

A confident, strong and defiant Storm Bird was there to greet him. The Storm Bird was proudly perched on a “No Swimming” sign, as if to make a point, as the storms whitecap waves rushed by, the winds gusted to great speeds and the rain occasionally poured down. None of this seemed of ruffle a feather of the Storm Bird, nor did the intrusive presence of the Editor. The Editor, snorkeling vest on and camera in hand, made his way into the stormy surf and approached the Storm Bird through the crashing waves and strong undertow. The Storm Bird, while attentive to the Editor’s approach, didn’t seem to mind the company and never flapped a wing. Instead the Storm Bird occasionally looked around, checked out the sky and then returned his attention to the Editor.

After a while of enjoying each other’s company, the Editor took the Storm Bird’s photo (see attached) and decided to leave the Storm Bird to his perch and peace. Astoundingly, The Storm Bird seemed committed to experiencing Hurricane Harvey from atop its sign telling people to stay out of the water and leave nature to itself. As the Editor made his way south to Jamaica Beach, he thought: “I will never forget the confidence, strength and independence of the Storm Bird”.